‘A Few Good Men’, directed by Nadir Khan, is a stage adaptation of the famous 1992 film by the same name, featuring Jack Nicholson, Tom Cruise and Demi Moore. Written by playwright and screenwriter Aaron Sorkin, the legal drama is set in the summer of 1986. A private first class marine William T Santiago is found dead at the naval base in the Guantanamo Bay, Cuba. Two of his fellow marines, Harold Dawson and Louden Downey, have been charged with his murder and are facing a general court-martial. Chosen to defend them is Navy lawyer and Harvard graduate, Lieutenant Kaffee (Neil Bhoopalam), who has a penchant for plea bargains.

Also assigned to the defense is Lieutenant Commander JoAnne Galloway (Ira Dubey), who smells something fishy about the whole case and suspects Dawson and Downey carried out a “code red” order: the marines’ term for an internal disciplinary punishment. Rajit Kapur, best known for his portrayal of Gandhi in ‘ The Making Of Mahatma’ and detective Byomkesh Bakshi in the eponymous TV series, plays a hardwired Base Commander Colonel Nathan Jessup (a character made famous by Jack Nicholson). With his body language and voice modulation, he brings the right amount of intensity that his character of a self-righteous zealot demands.

While it is natural to draw comparisons with the actors in the film, Neil Bhoopalam breaks from that mold and brings freshness to the stage and makes the character of Kaffee endearing and affable. Ira as Galloway standing up to Kaffee with fire and authority grabs attention. Other supporting actors, including Danish Hussain, Ashwin Mushran, Tavish Bhattacharya, Junaid Khan and Sukant Goel are commendable, too, and fit in their characters quite well. 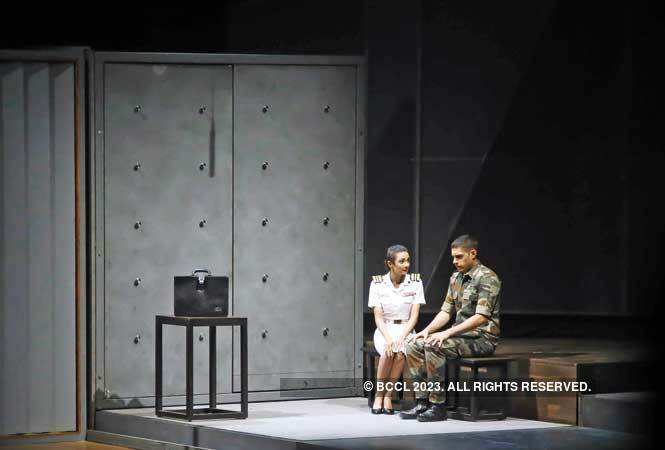 While the script is almost the same as the original, knocking off some important scenes somewhat weakened the play. The fact that Kaffee lives under the shadow of his illustrious lawyer-father has not been etched out effectively. The playful chemistry between Kaffee and Galloway has been sidelined, too.

The set and costume design, and music production, however, lift the play and add moments of suspense and drama. The set, designed by Juhie Gupta, transports the audience effectively from a military base camp to a courtroom. The costumes by Pallavi Patel make the characters believable. The music by Kaizad Gherda, who has composed and performed live for several plays, including ’12 Angry Jurors’, ‘Detective Nau Do Gyarah’, among others, heightened the drama.

Overall, ‘ A Few Good Men’, is a two-and-a-half hours of intense drama with a prominent cast, and a story that blends elements of satire, thriller and courtroom procedural in an intriguing manner.