The Luckin Coffee IPO Is Here. The Stock Price, Market Cap, and More to Know – Barron’s 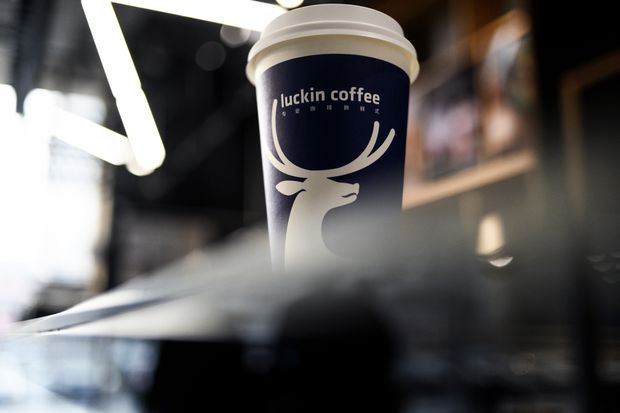 Luckin Coffee , China’s second largest coffee chain, is going public on Friday. The Xiamen-based company has priced its initial public offering at a range between $15 to $17 per share, according to a regulatory filing. Luckin Coffee stock will begin trading on the Nasdaq Exchange on Friday under the ticker LK.

Luckin, which is less than two years old and is often referred to as the “Starbucks of China,” is expected to raise about $586.5 million in its IPO. The listing will be one of the biggest by a mainland Chinese company in the U.S. this year.

Here’s everything you need to know.

What does Luckin Coffee do?

Luckin is challenging Starbucks’ long-held dominance of China’s freshly-brewed coffee market. Since it was founded in 2017, the company has been expanding at a rapid speed. As of March, Luckin had about 2,370 stores in 28 Chinese cities. The company plans to open 2,500 more new locations by the end of 2019, and to surpass Starbucks (SBUX) as the largest coffee network in China by number of stores.

“China’s coffee market is highly underpenetrated,” Luckin said in its IPO filing. “Inconsistent qualities, high prices and inconvenience have hampered the growth of the freshly brewed coffee market in China. We believe that our model has successfully driven the mass market coffee consumption in China by addressing these pain points.”

What is Luckin Coffee’s market capitalization?

Luckin has raised $550 million from investors that include the U.S. private equity group BlackRock and Singapore’s sovereign wealth fund GIC, according to Crunchbase.

Luckin was valued at $2.9 billion after its last round of funding in April.

Luckin plans to offer 30 million American Depository Shares in its IPO, each of which represents eight of the company’s Class A ordinary shares. With the IPO price set between $15 to $17 per share, Luckin expects to raise up to $586.5 million. Its valuation could rise to 4$ billion after the IPO.

The company plans to use the proceeds for store network expansion, customer acquisition, research and development, sales and marketing, as well as investment in technology infrastructure.

How does Luckin Coffee compare to Starbucks?

During its two decades in China, Starbucks has been targeting the country’s upper middle class with trendy stores and higher prices. Drinking coffee was viewed as a symbol of Western lifestyle and higher social status.

Luckin is taking a different approach, targeting white-collar millennials as its major consumers. More than 90% of Luckin’s stores are smaller “pick-up” stores located near office buildings or university campuses. They have limited seating, which allows the company to “stay close to our target customers and expand rapidly with low rental and decoration costs,” Luckin said in its fillings.

Luckin’s coffee is cheaper than Starbucks. The company is known for heavy promotional discounts to attract new customers and boost sales. Luckin’s list prices are about 25% lower than Starbucks’, according to Bernstein analyst Sara Senatore, but the effective price after discounts could be less than half of what Starbucks charges.

Read our recent cover story: Why Investors Should be Wary as the Unicorns Finally Seek IPOs

Technology and convenience is also key to Luckin’s growth. Most customers make their orders using Luckin’s mobile app, while a typical Starbucks customer still orders from a cashier in store.

How is Luckin performing financially?

Luckin sold more than 90 million cups in 2018 (not just of coffee) and reported revenue of $125.3 million. But aggressive spending on new stores, marketing, and customer acquisition has weighed on margins: Luckin had an operating loss of $238.1 million last year, for a negative margin of 193%. Starbucks, by comparison, had a positive operating margin of 15.7%.

Luckin’s financial situation has improved this year, however. In the first quarter of 2019, the company saw $71.3 million in revenue with a $78.5 million operating loss, a negative margin of 110%.

Steep losses aren’t uncommon during the expanding phase of new start-ups like Luckin. The key questions are whether the company can maintain its growth speed and transaction volume once the promotional discounts are taken away, and whether it can achieve profitability in the foreseeable future.

What are the risks of Luckin Coffee stock?

Luckin’s main competitors are other coffee shops such as Starbucks and British brand Costa Coffee. But the company said it also expects to compete against convenience stores and other food and beverage operators in the future. McDonald’s McCafe, for example, also launched its delivery service last year in Shanghai. Luckin’s coffee recipes are not proprietary, which means it has to rely on marketing and pricing strategies to retain customers.

It won’t be easy.

“Our competitors may have more financial, technical, marketing and other resources than we do and may be more experienced and able to devote greater resources to the development, promotion and support of their business,” Luckin said in its IPO prospectus.

Starbucks plans to open almost 600 stores in China annually and reach 6,000 sites in the country by 2023. Starbucks also announced a deal last August with Ele.me, the food-delivery platform owned by Alibaba , to jump-start its own delivery ambitions in China.