Starbucks Is Losing Its Coffee Lead in China – Motley Fool

For years, Starbucks (NASDAQ:SBUX) has billed China as one of its top growth opportunities. Former CEO Howard Schultz said he expected it to one day be the company’s biggest market, and the coffee chain is growing faster in China than in any other nation. Last year, it opened 612 new stores in China, and the current plan is to add another 600 stores a year through 2022.

Starbucks has succeeded in the tea-drinking nation by playing to customers’ tastes for conspicuous consumption and positioning itself as an affordable luxury. Beyond the status symbol factor, its strategy of offering a “third place” — away from home or work — has also resonated in China. Like people elsewhere, Chinese consumers have come to see Starbucks as an attractive place for a work meeting, casual date, or just a relaxing break.

However, in business, success attracts competition, and Starbucks’ success in China hasn’t gone unnoticed. Now, the company faces a serious new competitor that has come virtually out of nowhere. 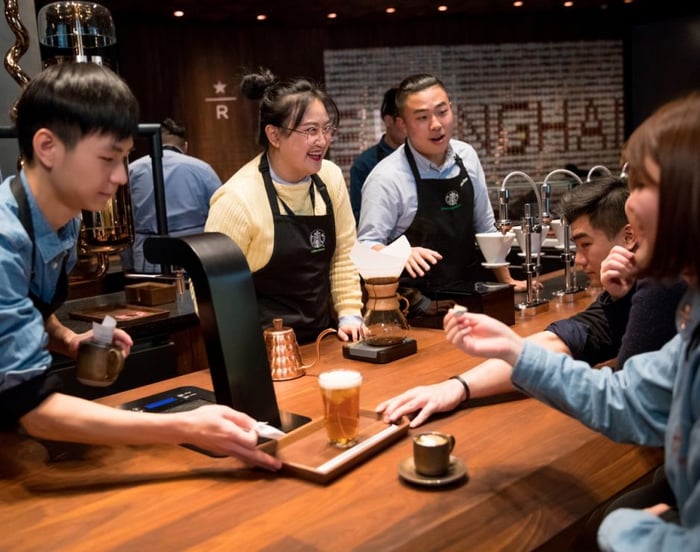 Two can play that game

Luckin Coffee was founded in 2017, and opened its first store in China last January. Since then, it has grown like wildfire, reaching 600 locations by last summer and ending the year with around 2,000 stores. This year, the company plans to add another 2,500 stores, giving it more than 4,500 by the end of the year, which would eclipse Starbucks’ total of 3,521 as of Sept. 30, 2018, the end of its last fiscal year.

Luckin is far from a Starbucks copycat, however. While the U.S.-based chain has long promoted its stores as a “third place” where customers could feel comfortable spending an extended time, Luckin’s are geared toward delivery. In fact, nearly half of them don’t have any seating at all. Luckin is also undercutting Starbucks on price — its coffee is up to 30% cheaper. The start-up is subsidizing drinks with generous “BOGO”-type offers, and management is content to operate at a loss as it builds out the chain.

According to Fortune, CEO Jenny Qian said the company was “in no rush to make a profit,” an unusual approach for a restaurant chain, and one that could cost it down the line. Luckin Chief Marketing Officer Yang Fei said, “Subsidy will remain as one of our core strategies, at least in the next three to five years.”  Finally, Luckin doesn’t accept cash — it takes payments either through its own app or through Tencent’s (NASDAQOTH:TCEHY) ubiquitous WeChat platform. Luckin views Tencent as a valuable partner.

Though Starbucks has said that it welcomes competition in China, and asserts that there’s plenty of room for other coffee chains, the company has been shifting its strategy there in response to Luckin’s growing popularity.

In August, Starbucks announced a new partnership with Alibaba (NYSE:BABA) that includes using its Ele.me on-demand platform to provide delivery from 2,000 stores in China. Mimicking one of Luckin’s key strategies, Starbucks said it would open “Starbucks Delivery Kitchens” inside Alibaba’s Hema supermarkets that would be specifically dedicated to delivery.

Starbucks’ comparable-store sales growth has slowed in China in recent quarters. In the first quarter of fiscal 2019 — its most recently reported quarter — comp sales there rose just 1%, with a 2% decline in transactions, compared to 6% growth in fiscal Q1 2018, before Luckin had opened any stores. While China’s economic growth also slowed during that time and there could be other factors at play, Luckin’s rapid spread likely had some impact, as Starbucks had regularly put up strong comp sales growth in prior years.

During its December Investor Day conference, Starbucks said it would continue to expand rapidly in China to build a first-mover advantage, but also projected long-term comparable sales growth in the 1% to 3% range in the market, slower than the 3% to 4% range it forecast for the U.S., and likely below the expectations of some investors. Among the headwinds Starbucks noted were cannibalization (as it more deeply penetrates major markets like Beijing and Shanghai) and the slowing Chinese economy, but the company also called out competition.

“We have to acknowledge that competition is intensifying,” CFO Patrick Grismer said. “Now, it’s our belief that that competitive impact is relatively short-lived because of the strength of our brand proposition in China.”

Whether the impact from Luckin and other entrants like Coca-Cola’s newly-acquired Costa Coffee will be temporary, as Grismer says, remains to be seen. Certainly Luckin’s loss-generating strategy carries significant risk, as the company lost more than $100 million last year, but with 2,500 locations coming on line this year, its impact on Starbucks may get more intense before it eases.

What is clear is that Starbucks is making smart moves to prepare itself to face the threat, including partnering with Alibaba and quickly rolling out delivery to 2,000 stores in China. While Starbucks’ growth path in China may have gotten bumpier, the java giant still appears to be on the right track.