Jiggling stacks of Japanese pancakes are about to flood Instagram feeds.

Located on the ground floor of the mall near Nordstrom, the all-day cafe occupies a hefty, 2,700-square-foot space, outfitted with a fake tree and a giant stack of plush pancakes primed for selfies.

Will there be lines? You bet.

The first Gram Cafe opened in Osaka in 2014. Now, there are more than 60 across Japan, Thailand and Hong Kong, with locations planned for Singapore, Indonesia and Australia.

San Francisco resident Dorothy Wong, a former pastry chef, owns the Gram franchise in California, licensing the name from the Japanese company. San Francisco has a proven affinity for Japanese restaurant chains like Ippudo and Marugame Udon, which is part of what made it seem like a promising candidate for Gram’s first American location. 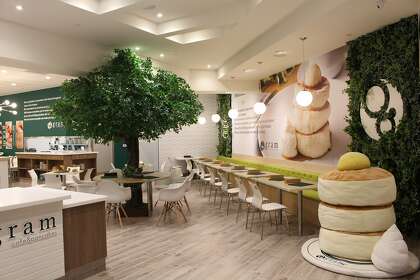 On a recent trip to Japan, she tasted the souffle pancakes from Gram and decided it was the perfect thing to bring back to the Bay Area.

“Everything from Japan is detail and quality,” she said.

At Stonestown, diners will need to line up for tickets to access those coveted souffle pancakes ($16 for three). Only 30 orders will be available at three times per day: 11 a.m., 3 p.m. and 6 p.m.

“It’s not a gimmick,” Wong said. “It’s not like we want people to stand in line. It has to be precise, delicate, labor intensive.”

These souffle pancakes are made to order, and Wong estimates they take about 30 minutes to prepare. The process takes over almost the entire kitchen: Chefs pipe the stiff, egg white-rich batter into tall paper molds on the griddle, then cover each with a dome-shaped lid to create steam.

Gram chef Teruyuki Yasumura flew in from Japan to train the staff, demonstrating how to carefully pipe, flip and cover to ensure an evenly cooked, unusually fluffy and extra tall pancake. He places three on top of one another just so, ensuring an eye-catching jiggle without any toppling over. 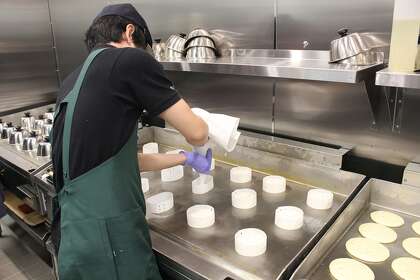 The pancakes are finished with a dusting of powdered sugar, a sphere of butter and dollop of whipped cream. Then, servers will rush them over to guests before they start to slowly cool and collapse.

Gram sparked a souffle pancake craze in Japan, and the trend has recently begun to hit the U.S. In San Francisco, Sugarhill Kitchen and Derm Restaurant are already serving them, but Wong is confident Gram will stand apart.

“This is the original,” she said.

The regular pancakes are slightly chewier than the classic American style, with a more egg-forward flavor. On the sweet side, they might be turned into a stack of red bean matcha pancakes ($16), layered with matcha mascarpone cream and mochi — it’s a special only available in San Francisco. Savory options include “taco pancakes” ($17), loaded with spicy beans, lime and chips, and an eggs Benedict ($18) with smoked salmon and turkey bacon.

To drink, there are smoothies, beer, wine and espresso drinks using Sightglass Coffee.

Wong expects to open a total of 12 locations across California, with a maximum of six in the Bay Area. She hopes the second cafe will land in Cupertino, and perhaps another in Berkeley further down the line.

But first, San Francisco. Is the team ready for the crowds to descend?