Cafe X, which over the past three years became a pioneer in coffee industry automation, has abruptly closed its three downtown San Francisco cafes at One Bush Plaza, inside the Metreon and on Market Street near Montgomery Street.

“We will (be) offering refunds to anyone with prepaid app credits and invite them to check out our latest and greatest robotic coffee bar experience on their (next) flight at SJC or SFO,” Hu said on Twitter. Hu did not respond to requests for comment.

Cafe X’s popularity over the years stemmed in part from the Bay Area’s infatuation with technology, food and automation, be it in the form of smoothie-making robots; a restaurant (called Creator) where a robot makes $6 hamburgers; or a salad-chopping kiosk. What was always the question about Cafe X was whether the business model could be sustainable where other companies that also sought to be early automation leaders failed. 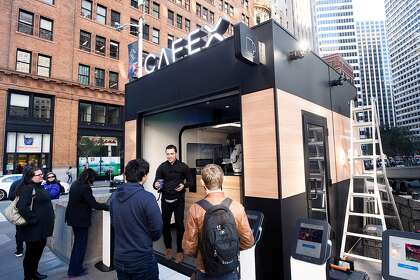 Fast-casual restaurant chain Eatsa, known in San Francisco for its automated service and quinoa bowls, abruptly closed its locations across the country in 2017 and re-branded as a tech company called Brightloom in 2019.

Zume Pizza, an automated food delivery company based in Mountain View, recently laid off 80% of its employees, according to Business Insider.

Cafe X was founded in 2015 and opened its first cafe — a glassed-in kiosk where a robotic arm made drinks and interacted with customers — at the Metreon in 2017. A cafe on Market Street near Montgomery opened in early 2018, followed quickly by a nearby kiosk at One Bush Plaza, all featuring robotic arms that Hu told The Chronicle can cost $25,000.

Even with a shift toward airport locations, Cafe X will continue to have competition in the automated coffee market. Briggo Coffee Haus has a robotic barista capable of making 100 drinks per hour at SFO’s Terminal 3.