Talking with watch designer George Bamford about essentials brand Goodlife is like talking to a particularly fervent music fan about when they discovered their favorite band. The sense of pride, the little lightning-zap arcs of energy jumping off of his words, even the benevolent feeling of ownership—they’re all there. But instead of a kid with a wispy mustache explaining why The Comsat Angels were the truly genius post-punk band to emerge from England in the late ‘70s, it’s the high-end watch world’s best-loved rebel telling you all about how he found a brand that makes the perfect T-shirt. Honestly, it’s a whole lot of fun.

This highly energized conversation, by the way, is being fueled by something even more elusive than the perfect tee: British sunshine. “I’m in a car and it’s a beautiful sunny day, so I’m happy,” Bamford tells me. (Later, he’ll explain that he’s not being arrested when the whine of a siren creeps up in the background. He’s just that kind of guy.)

Ruminations on the weather and the law all wrapped up, Bamford­—who cut his horological teeth customizing luxury watches (and occasionally ruffling the feathers of the brands that made them) before launching his own line of sought-after timepieces under the Bamford London label—explains what it was like to find the NYC-based Goodlife. “You know when you go on a discovery to find the perfect T-shirt or the perfect hoodie or anything like that?” he asks. “Goodlife is that…I went on a voyage of discovery and I was just like, ‘I like these guys. I love the quality,’ and I just was like, ‘I have to wear.’”

To learn how you can enter to win a Bamford x Goodlife watch of your own, check out Goodlife’s Instagram giveaway.
LEARN MORE

So that’s how one half of the Bamford London x Goodlife collaboration, which launches today with three new versions of the Mayfair Sport watch, found the other. But this was an act of mutual discovery. “I’ve been following Bamford for years,” says Goodlife founder Chris Molnar. “I’m a big watch guy, and I was always drooling over everything they were doing.”

That fondness turned, naturally, into a habit of keeping tabs on Bamford on Instagram. Fast forward to an August 2019 vacation in Greece for Molnar and his pals. The former checks in on Bamford’s Insta, and sees a watch he loves but isn’t available on the brand’s website. “I shot them a DM from Goodlife. I was like, ‘Hey, this is Chris, the owner of Goodlife. I love this watch. You guys don’t have it on your site.’ And George got back to me within like five minutes, and he was like, ‘Hey Chris, I love Goodlife. Let’s make you a watch.’” 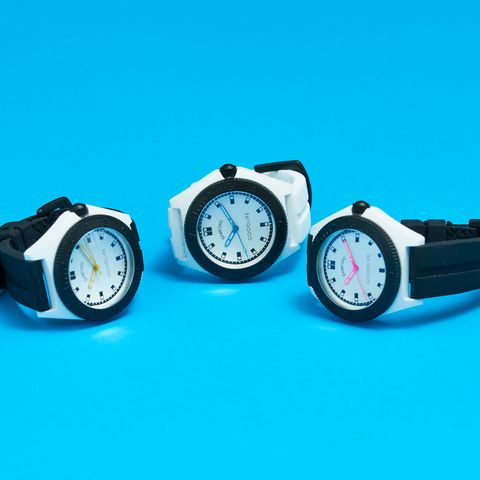 All three colorways of the Bamford x Goodlife sport watch.

Because this is a story of collaboration in the digital age, things snowballed from there. “I was like, ‘Yeah, maybe one day we can even do a Goodlife watch with Bamford. I love you guys,’” Molnar says. Bamford was into it. “I was just, ‘Hell yes, we’ve got to work together. I fricking love you guys,’” Bamford says. “I just decided, let’s rock it, let’s have fun, and let’s do something that actually personifies the brand, that works on both sides.”

Less than a year later, the fruits of those DMs are here: Three Bamford Mayfair Sport watches in Goodlife’s signature black-and-white branding, with a black dial on a white case, and interchangeable black and white rubber straps. Each is made from super-durable, high-impact polymer, which, paired with those straps, makes for a very summer-friendly timepiece. “I designed it that way in the first place to make it so that people just go, ‘Yeah, all right, I’m going to wear this and I don’t mind, I can wear it anywhere,’” Bamford explains. “‘I can jump in and out of the sea, I can be on the beach, I could be in the swimming pool,’ whatever it is.” 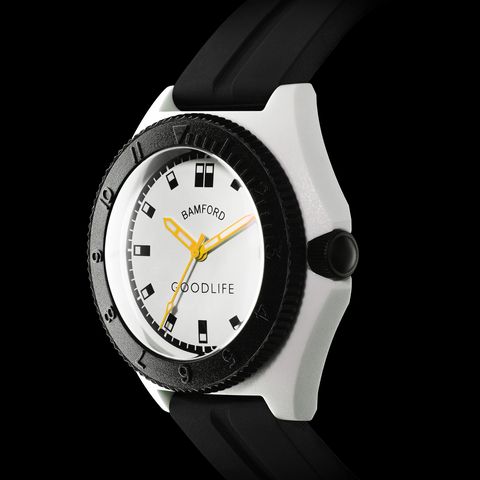 The watch features a super-durable case made of high-impact polymer.

And each is finished with an extra hit of color on the hands inspired by Goodlife’s spring/summer 2020 collection—either neon pink, blue, or yellow. “That was their genius idea of saying, ‘Actually could we put a hint of color that’s just on the hand to give that exhilaration and make it something different?’” Bamford says of the Goodlife crew. “And I was just, ‘Yeah, hell yeah.’”

It was a deliberate decision, paying homage to the watches of the ‘80s and ‘90s and having a little fun with the whole project. “Whenever we can use neon, we take full advantage of the opportunity,” says Molnar, who’s happy to point out that his favorite of the bunch is the neon pink. “I think the last thing anyone needs is an expected watch from a non-watch brand. We wanted to do something that was unique and cool and gave people a reason to want it.”

Jonathan Evans Jonathan Evans is the style director of Esquire, covering all things fashion, grooming, accessories, and, of course, sneakers.