MATAMOROS, Mexico — Dozens of Nicaraguan migrants wearing donated clothes held garbage bags and roamed among a couple of thousand tents at an encampment in this border city to pick up trash.

“Grab it!” Francisco Javier Landon Rodriguez told his 4-year-old son, who launched toward a scrap and tossed it into his father’s bag with a flourish.

It was a Friday, also known as “cleaning day” to the 130 or so Nicaraguan asylum-seekers tasked with the job. Each day, a different nationality cleans the nearly 9-acre encampment, which is occupied by more than 2,500 asylum-seekers who are subject to the Trump administration’s Migrant Protection Protocols, or “Remain in Mexico,” policy. 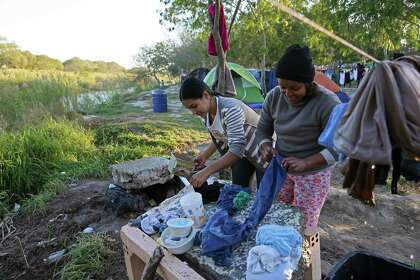 Under the protocols, the U.S. has returned more than 60,000 migrants to Mexico to await their asylum hearings.

The cleaning routine is one of many practices put in place by a newly formed migrant council made up of two representatives from each nationality in the encampment. After languishing for months in Mexico as they wait for their asylum cases to close, the migrants have begun to organize to improve their living conditions.

Some have likened it to a small village.

“We’re all living here and we have needs, and we want everyone to be treated fairly,” said Landon Rodriguez, who is one of the appointed representatives for Nicaragua. “The council helps with that.”

The council is the latest migrant effort to meet standards similar to those found in refugee camps around the world. The United Nations High Commissioner of Refugees provides some aid to the camp, though it would be up to the Mexican government to request further UNHCR intervention.

“The conditions are not good, they are not safe for the people and they don’t meet the basic standards,” said Josep Herreros, UNHCR’s asylum protections official in Mexico. “We don’t think this should be a long-term solution. We need the (Mexican) government to take responsibility.”

In Nuevo Laredo and elsewhere along the border, thousands of migrants live in religious-affiliated shelters. 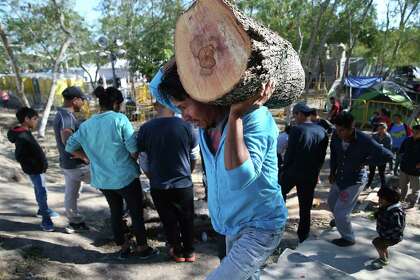 In Matamoros, their homes are donated tents patched with black garbage bags and clustered on dusty, federal land alongside the Rio Grande.

Joel Fernandez, leader of the Cuban asylum-seekers in the camp, said it is like “a refugee camp anywhere in the world. Except the conditions here are subhuman.”

The U.N. agency began offering services about a year ago in Tijuana and Mexicali, which share a border with Southern California. But, citing safety concerns, it has not set up offices in Matamoros. U.N. staff in Monterrey visit about once every two weeks, mostly to provide legal assistance on asylum cases.

The U.N. has provided legal counseling to more than 1,000 migrants borderwide, Herreros said. 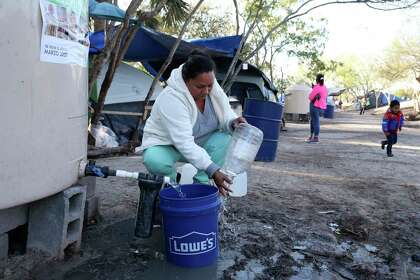 On ExpressNews.com: ‘Migrants hunkered down in crowded, flithy border encampment’

“It’s hard to keep clean in this environment,” said Maura Sammon, medical director for the nonprofit Global Response Management. “They have garbage bags as their roofs. How can you maintain your health like that? It’s disgusting, it makes me cry.”

U.N. refugee camps are supposed to have one toilet for every 20 people. Matamoros has about one for every 60. And many of the asylum-seekers here still resort to bathing and washing clothes in the unsanitary Rio Grande, creating a breeding ground for infections and rashes.

In other parts of the world, refugee camps typically are in a secured, fenced area. Here the migrants are exposed to the elements and criminals. People have disappeared from the camp. Some moved away. Some were kidnapped. 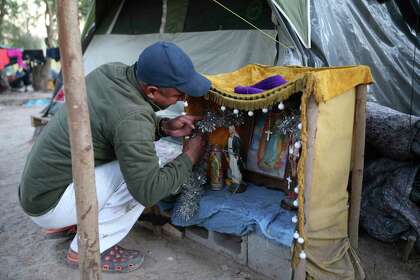 “We’re wearing down little by little. I can’t stand it here,” said Edwin Vaquiz, a Honduran who has spent several months in Mexico. “We’re suffering.”

Nonprofits, nongovernmental organizations and volunteers on both sides of the border have donated time and money to improve the camp.

As volunteer Brendan Tucker walked inside the encampment on a recent afternoon, he said: “You used to not be able to come down here without stepping in feces” — until they got the funds and government approval to install about 50 port-a-potties.

“We’re doing the best we can with what we have, and it’s not enough.” 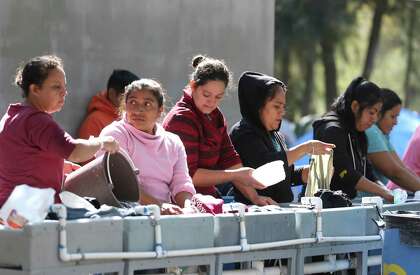 The leadership council has been meeting once a week for more than a month. It’s establishing sanitation guidelines, taking inventory of the donations stored in locked tents and asking each nationality to keep a censo, the count of migrants living in the camp — their ages, family members, clothes sizes and length of stay.

“It’s completely self-formed. And it came out of necessity,” said Tucker, who moved to Matamoros to help the asylum-seekers and co-founded the Asylum Seeker Network of Support. “A lot of migrants who are facing persecution come from a union background and big movements that required organization.”

The council has made the camp cleaner, more orderly and community-minded. But its creation also is an unnerving acknowledgment to the migrants that their life here isn’t as temporary as they’d hoped.

The Mexican government has relied on nonprofits to improve the camp, though it did install a few showers and wash stations. The federal government opened a couple of shelters for MPP migrants in other border cities.

The city of Matamoros led a push to move the migrants to a designated shelter late last year after Mexican residents expressed concern about the spread of diseases. A couple of hundred migrants moved to the Alberca Chavez shelter, but most have stayed at the encampment. 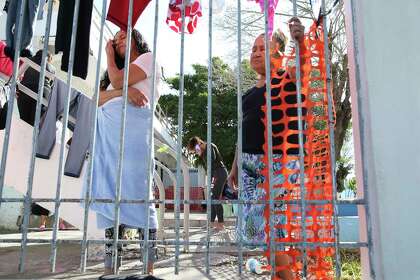 The camp has swelled since MPP expanded to Brownsville last July. More migrants continue to arrive at the border, and the court process has grown lengthier amid the more than 1 million cases in the backlogged U.S. immigration court.

So migrants go about their daily routines as they wait for their hearings.

“What else can we do?” Landon Rodriguez said, taking a fishing hook his 4-year-old picked up from the ground, wrapping it in plastic and placing it in the garbage bag. 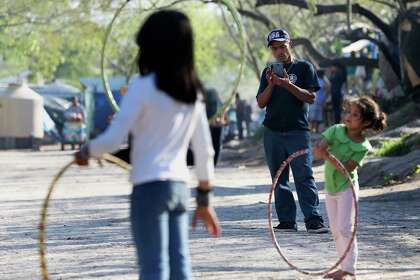 “Gracias,” he told his son as they looked for more trash.

‘Fighting for each other’

The smell of sugar and fried dough wafted from a tent and trailed one woman as she wound her way between tarps and under trees with a basket of fresh doughnuts.

“Donas, donas!” she yelled. Kids popped their heads out of tents and went back in to beg their parents for Mexican pesos.

The tent camp has a few small businesses, often started by former bakers, cooks and shopkeepers. One tent restaurant is named “Vista al Norte” because it’s on a ridge facing the Rio Grande. Run by a Salvadoran family, it sells pupusas, traditional stuffed tortillas. 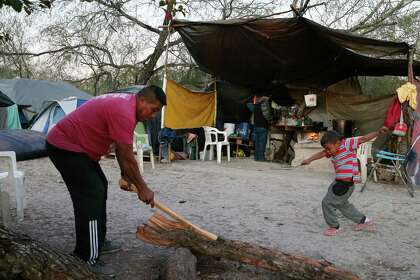 Others were making fried taquitos or rice and beans. Some bought fruit from local convenience stores and sold them for profit at the camp.

The asylum-seekers have divided the encampment into three regions, each getting its own “tiendita,” or small store, where donations are kept. Big cardboard signs for the stores hang on trees.

The asylum-seekers planted gardens. One has a scarecrow made of donated children’s clothing. Another is called “Hortaliza Hondurena.” But both were abandoned after Mexican authorities said growing food wasn’t allowed, Tucker said. Because the migrants are on federal Mexican land, everything has to be temporary and easily removable.

At the medical tent run by Global Response Management, a handful of asylum-seekers who are trained as medics, gynecologists and pharmacists also help provide care. 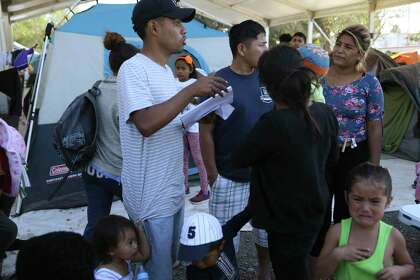 The camp has started offering school classes. About 100 kids gather at a nearby plaza every weekday, eagerly awaiting the arrival of six Cuban asylum-seekers, who come with tubs of donated books and markers.

“At 4 p.m. they’re sitting here,” said Elizabeth DeSpaigne, a former Cuban medic and a current teacher. “When they see me coming, they start calling to me. It makes me happy.”

She, like most Cubans here, is fleeing political persecution for refusing to comply with political propaganda, she said.

DeSpaigne said she’d also gotten into trouble for speaking out against Nicolas Maduro, Venezuela’s president, on a medical trip there.

During class on a recent Friday, a small group of young boys and girls crowded around her as she sat with her back against a wall. She held open a book and asked “What makes up the environment?” 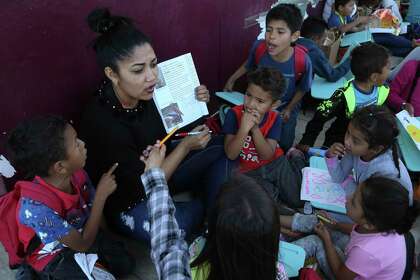 Fridays are for science. The kids called out “the ocean!” and “plants!”

She smiled. Many of the students touched her legs and one pushed his head under her armpit.

“There’s 6- and 7-year-olds that don’t know the basic geometrical shapes,” she said after the class. “There’s 9-year-olds that never started school or it was interrupted.”

“I have court on Wednesday, so that’s a tension I have,” she said. “So at least I have this time with the kids. I’m helping them and they’re helping me.”

She said the sense of community and trust has grown as the months ticked by. Though they all come from different countries and have their own reasons for fleeing, they’re brought together by this common hardship. 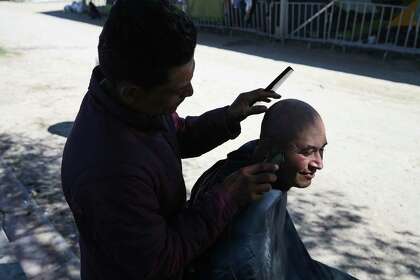 Fernandez, the former lawyer who’s fleeing Cuban political persecution and represents the Cubans here, said that’s another reason why the council has formed — to strengthen their community.

“We’re on land that’s not ours and we didn’t come to stay here,” said Fernandez. “But we’re a community and we’re fighting for each other.”

Tucker had distressing news for Gaby Zavala, founder of their volunteer group, when she arrived at their Matamoros resource center on a recent afternoon. 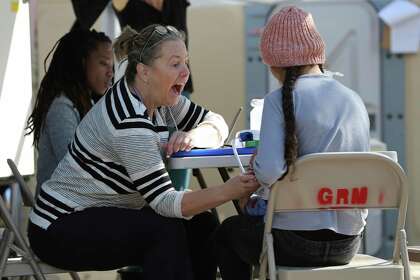 Minutes later at the camp, the dehydrated Honduran woman stepped out of the GRM trailer, a bag of fluids held above her head and an IV in her arm. A small girl followed her.

“Here’s the paperwork. This is her backpack. She’s very concerned about the child staying with her,” a medic told Zavala, who was driving a newly donated Toyota Tundra.

GRM sees about 1,000 people a month, costing the organization $20,000 over the same period. Half of the clients are children.

On ExpressNews.com: ‘San Antonio agency on the front lines of migrant aid’

Respiratory illnesses like asthma and bronchitis, and gastrointestinal infections, including diarrhea and viral gastroenteritis, make up most of the cases. About 15 percent of them are labeled “critical other” – such as heart attacks, sickle anemia or ruptured appendices. 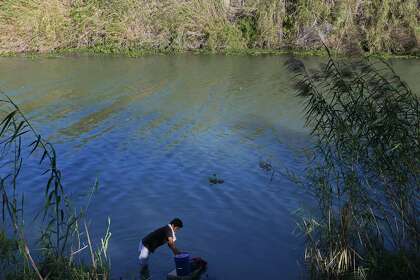 “The longer people are displaced, the more likely they are to suffer complications from routine illnesses,” said Helen Perry, executive director of GRM. “It’s only a matter of time before it starts to have serious consequences on people’s lives and well-being.”

Without enough sinks, bathrooms and washing stations, many migrants still rely on the Rio Grande as a water source. The tents of tarp and garbage bags provide little protection from airborne illness, and packed camp — combined with the high-stress court process — means illnesses catch and spread quickly.

Despite a Homeland Security policy memo that allows ill or otherwise vulnerable migrants to stay in the U.S. to pursue their cases, agents sometimes send them back into Mexico.

In difficult living conditions with no end in sight, some desperate parents have begun sending their children across the border without them. Sandra Velasquez is one of them.

Velasquez, 23, had been living in Matamoros for five months with her 3-year-old daughter, Alexandra.

The girl suffers from asthma, and at the camp it kept getting worse, Velasquez said.

“She couldn’t breathe well, her temperature was high, she was always cold,” she said. “I couldn’t take it.”

As her trust in the community grew, so did her determination to execute a plan she’d witnessed from other desperate mothers. About a week ago, she gave her daughter to a woman who was headed to the bridge for her court hearing in Brownsville.

“We’d never separated before, but it’s hard for kids to live here,” Velasquez said. “They told (Alexandra) I was already in court so she wouldn’t cry.”

The woman brought Alexandra across the bridge as planned. U.S. Customs and Border Protection then took the little girl and eventually placed her in a government shelter in New York. 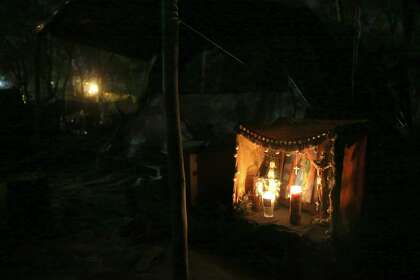 “She has more of a future there. She’ll be healthy,” Velasquez said. “But it hurts.”