Loyal customers of Caffe Sapore in North Beach held a rally Thursday for their beloved corner cafe, which says it is facing eviction after 23 years in the neighborhood.

About 75 to 100 people showed up, and owner Elias Bikahi shook hands and greeted old friends who walked into the spot at 790 Lombard St. Regular customers sipped coffee and chatted in twos and threes at the popular cafe, which offers freshly prepared focaccia and bagel sandwiches, breakfast quiches and an array of soups and salads, all with a Mediterranean influence.

Bikahi said he received a 90-day notice from his landlord last month, informing him he needed to vacate the space by Dec. 31st. No reason was given, he said.

The landlord of the property, Siu Chuen, could not be reached for comment.

“I am scared and my employees are scared,” Bikahi said. “It’s hard to think about a place being destroyed like this, and it’s not easy to pack up and leave and start somewhere else on a whim. Not in San Francisco.”

State Sen. Scott Wiener, D-San Francisco, attended the rally and said successful small businesses are being pushed out by landlords.

“When our small businesses are pushed out, that undermines and badly damages the fabric of our neighborhoods,” he said. 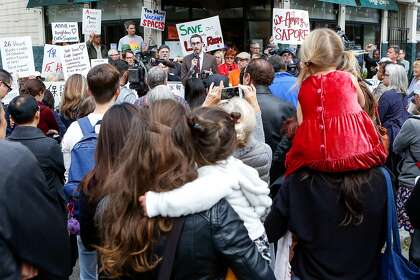 The cafe’s woes are emblematic of North Beach, where the percentage of empty storefronts grew from 13% in 2017 to 21% in 2018, the highest increase in any of San Francisco’s retail areas, according to city data.

A Chronicle investigation into the shuttered sites this summer showed many reasons beyond the rise of online shopping that North Beach, the city’s old Italian town, came to rank fourth in retail vacancies among San Francisco’s 24 recognized neighborhoods.

In North Beach, as throughout the city, the cost of doing business for mom-and-pop operations is high, including rent and labor. The city’s permit process takes time and adds complications.

Cafes like Bikahi’s are also grappling with industry shifts such as the rise of app-based food delivery services that cut into their business.

The city has recently passed legislation to address the issue, and other proposals are in the works.

A law pushed by Supervisor Sandra Lee Fewer requires landlords to register empty storefronts with the city or face a hefty annual fine; it took effect in April.

Supervisor Aaron Peskin is spearheading a move to charge landlords a vacancy tax if their properties sit empty for six months. Peskin, whose district includes North Beach, says the goal is to dissuade “bad actors” from intentionally keeping storefronts empty.

Peskin, who said he’s known Bikahi since the 1980s, spoke to the crowd Thursday about the importance of saving small local businesses and fighting as a community to save what many neighbors consider their “living room.”

“This is a neighborhood, like many in San Francisco, under a tremendous amount of pressure,” he said.

Bikahi said he’s tried to reach the landlord on numerous occasions but his efforts have been unsuccessful.

“I don’t even know what she plans to do with the location,” he said.

Bikahi, an immigrant from Lebanon, came to the U.S. in 1984 and opened the cafe in 1996, when “there was no one on the northern side of North Beach,” he said. One of the few businesses on a mostly residential block, he quickly found a loyal clientele.

Andrea Michaels, a regular customer at Caffe Sapore since it opened, embraced Bikahi after the rally. She lives a 20-minute walk away in Nob Hill. She said she loves the light that pours in through windows on both sides, the bagels with lox, and the student artwork that dots the walls. She’s watched Bikahi’s children grow up.

“It’s everything a North Beach cafe should be,” she said.